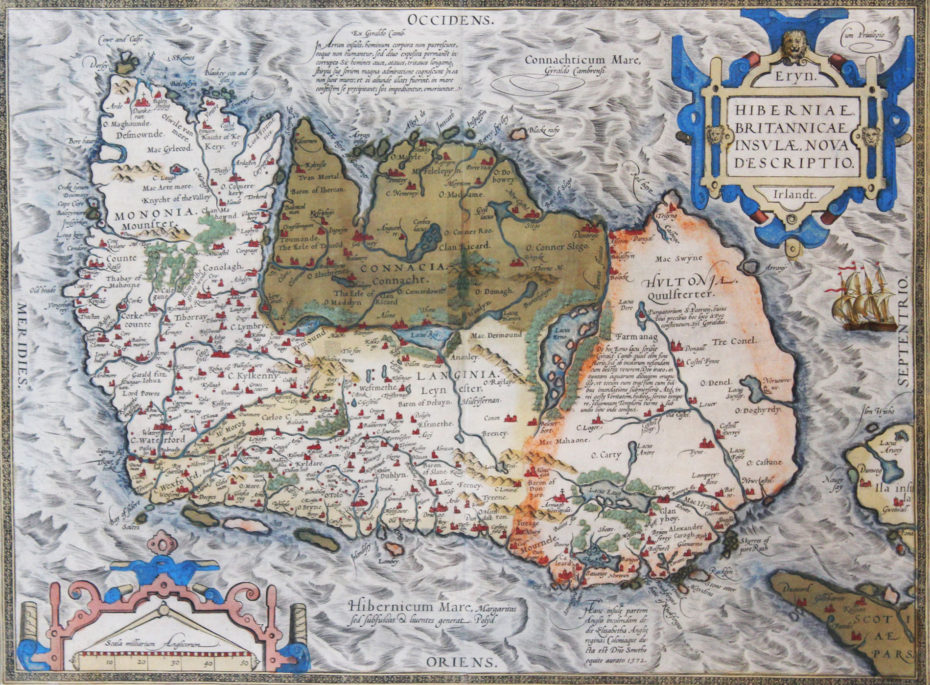 “Eryn Hibernia Brittanicae Insulae, Nova Descriptio Irlandt”… 1573…Abraham Ortelius (1527 – 1598)…  14” x 19” (36 cms x 49cms) …copper engraved, original hand colour, from Theatrum Orbis Terrarum published in Antwerp, (First printing of two). First Plantin edition. Latin text to verso. The map is oriented towards Jerusalem as was the practice of Christian map makers of this period. Ortelius, published his “Theatrum Orbis Terrarum” in 1570. The atlas achieved instant fame as “the world’s first regularly produced atlas” (Skelton), being the first with maps prepared to a uniform format. It was also an immediate commercial success, being reprinted four times in 1570.  Between 1570 and 1641 (the publication of the last recognised edition of the Theatrum) the atlas was able to expand from its original 53 maps to over 160. Over 30 different editions, with text in Latin, French, Dutch, German, Italian, English or Spanish, testify to the popularity and esteem attributed to the work. Marcel Van Den Broecke, whose fascinating work on Ortelius and his maps is often quoted, estimates that around 7300 complete atlases were published using a total of 234 copperplates, either replacements or reworkings as plates became out-dated, worn, or as new information became available. The maps themselves are finely engraved, often very decorative and generally found with text on the reverse. After Ortelius’ death in 1598 the atlas continued to be printed and published by the Plantin Press. Between 1602 and 1609 it was published by Johann Baptist Vrients, who added a variety of fine maps including the very decorative large plates of England, Wales and Ireland. Publication reverted to the Plantin Press, under the control of the Moretus brothers, from 1612. Map Ref: 801