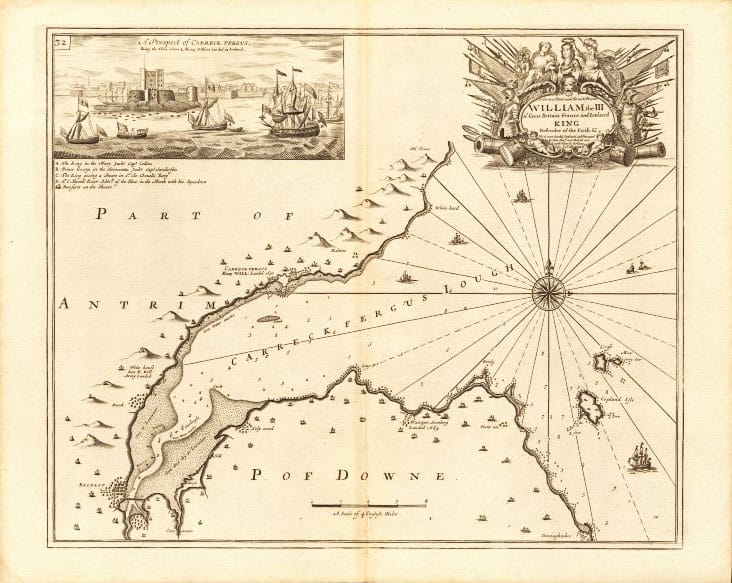 “Carrickfergus Lough”… c1750…. original copperplate nautical chart from “Great Britain’s Coasting Pilot” published in 1693 …25” x 20” (63cms x 50cms)… Captain Greenvile (or Greenville) Collins R.N.(1645 – 1694). Collins was a prominent hydrographer, commissioned by King Charles II in 1676 and appointed by Samuel Pepys (then Secretary to the Admiralty), to chart the coasts of Great Britain. The resulting atlas – Great Britain’s Coasting Pilot – was the first original sea atlas to be produced by an Englishman. In 1681, Collins gained the king’s preferment to survey the country’s coasts. The Admiralty supplied Collins with the 8-gun yacht HMS Merlin for the first two years and later the yacht HMS Monmouth until 1686. His work was carried out under the supervision of Trinity House, who also supported the project financially. Samuel Pepys insisted that Collins be made a younger brother of Trinity House. Collins spent seven years on the survey, the first edition of which was published in 1693. The charts, while not completely accurate, were an enormous advance on anything before them, entitling Collins to rank as not only one of the earliest, but also among the best of English hydrographers. Twenty-one further editions were published during the eighteenth century with the last being printed in 1764. We have framed it to museum standards. Each process is fully reversible. We used 100{ce6efdd1e50ce4b7df5cabaeb3f849a83848ab36d34025d0a9cd9167ad86a739} cotton rag materials, including mount boards, backing boards and tapes and museum quality glass which offers 99{ce6efdd1e50ce4b7df5cabaeb3f849a83848ab36d34025d0a9cd9167ad86a739} protection from harmful UV B rays and offers the highest clarity currently available. The map is in excellent condition. Ref: 980