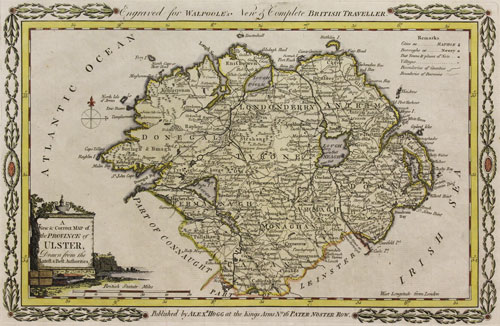 “Ulster”… 1784…George Augustus Walpoole… (one of Alexander Hogg’s several assumed names).. from The New British Traveller….later hand colour… 12” x 7.5” (31 cms x 19 cms) … The New British Traveller was originally issued as a 60 weekly part-work by Hogg. Commencing in 1783, the series was completed in 1784. Titles were provided for the pages to be bound in a single volume. The work is a topographical review of Great Britain, containing numerous prints and a set of county and general maps. The maps are of varying sizes, being typically arranged 2. 3 or 4 to a single page, with adjoining borders. This map of was one of the few full page sized maps in the book. The maps were re-engravings of Kitchin’s “England Illustrated” maps of 1764. The text across the base of the map indicates this is a later printing, in this case 1784. Map Ref: 934