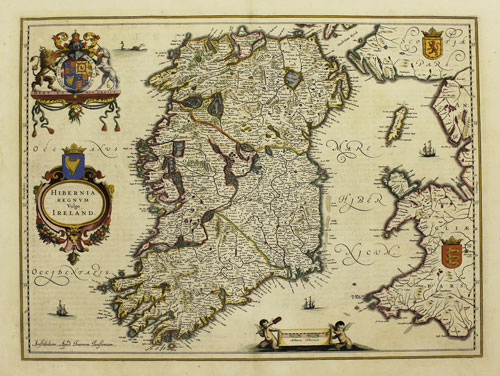 “Hibernia Regnvm Vulgo Ireland” c1633 … by Johannes  Jansonius Jr. (1588 – 1664).  Copperplate engraving… full original hand colour. 15” x 20” (38 cm x 50 cm). Published in Amsterdam. Ireland oriented East West. Janssonius was born in Arnhem, the son of Jan Janszoon the Elder, a publisher and bookseller. In 1612 he married Elisabeth de Hondt, the daughter of Jodocus Hondius. He produced his first maps in 1616 of France and Italy. In 1623 Janssonius owned a bookstore in Frankfurt am Main, later also in Danzig, Stockholm, Copenhagen, Berlin, Königsberg, Geneva and Lyon. Elisabeth Hondius died in 1627 and he remarried one Elisabeth Carlier in 1629. In the 1630s he formed a partnership with his brother in law Henricus Hondius, and together they published atlases as Mercator/Hondius/Janssonius. Under the leadership of Janssonius the Hondius Atlas was steadily enlarged. Renamed “Atlas Novus”, it had three volumes in 1638. In 1646, a fourth volume came out with “English County Maps”. The map is in excellent condition. Ref. Map 32