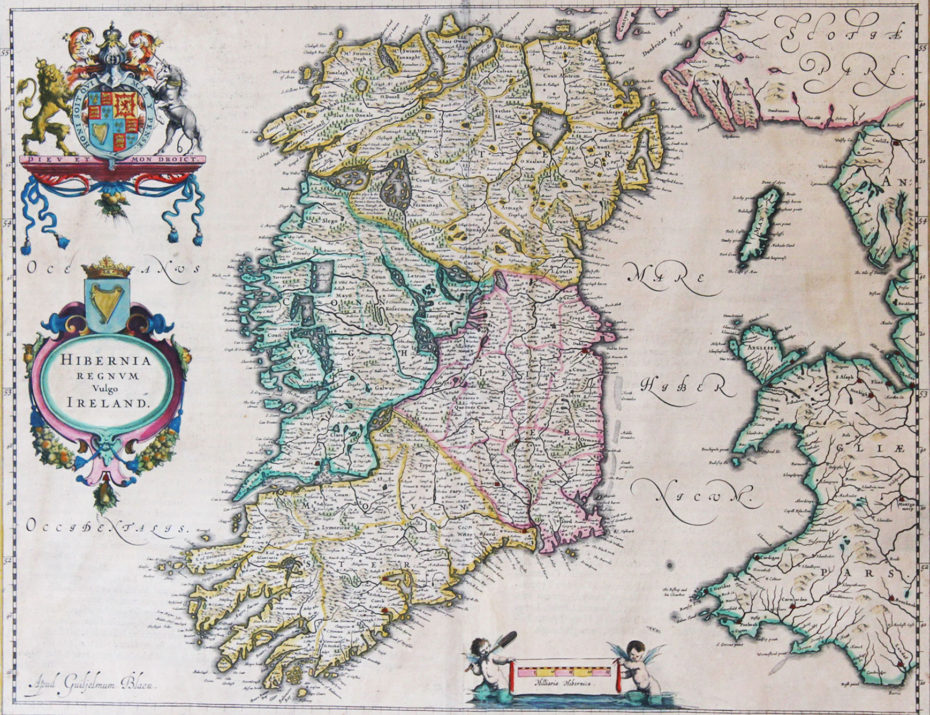 “Hibernia Regnum Vulgo Ireland”… 1635…Willem Janszoon Blaeu (1571 – 1638)…  15” x 19.5” (38.5 cms x 50cms) …copper engraved,  early possibly original hand colour, from Théâtre du Monde ou Nouvel Atlas (the French language edition of the Theatrum  or Novus Atlas). R. Baynton-Williams in “Investing in Maps” wrote that “The finest Dutch map publishers were the Blaeu family, and they hold the title of mapmakers supreme for any period of cartographical history.”
Willem JanszoonBlaeu (1571-1638) founded the Blaeu publishing house and established its fine reputation for maps.  His long-standing interest in mathematics and astronomy led him to Tycho Brahe in Denmark where he learned the art of globe-making.  On returning to the Netherlands, he set up a business in Amsterdam to make use of his new-found globe-making skills.  The business was to develop to incorporate its own printing press and Willem Janszoon Blaeu’s first publications included sea charts in Het Licht Der Zee-Vaert in 1608 and a revised issue of Copernicus’ De Revolutionibus Orbium Caelestium.
He published his first world atlas, the Atlantis Appendix in 1630, in association with his eldest son, Joan Blaeu (c.1599-1673) In 1634, he commenced publication of the Theatrum or Novus Atlas.  This two-volume work contained  208 maps and was published in four separate editions in four different languages. Map Ref: 800